Skelmersdale Apprentice at the Investment Centre 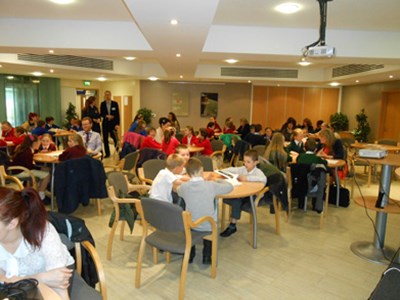 The Skelmersdale Apprentice reached its climax last week, with the 14 participating groups sending representatives to West Lancashire Investment Centre to take part in the grand finale.

The task was to come up with a new promotion that championed a healthy lifestyle and which could be marketed through the product the children had been designing over the previous rounds.
Investment for this promotion then had to be sought from the ‘Dragons’ Den’ which comprised of a representative from PepsiCo, West Lancashire College, Shares Lancashire and RDPO Enterprises.
The Mayor and Mayoress in addition to John Nelson, Head of Leisure and Cultural Services for West Lancashire Borough Council also came to support the event and listen to the children’s presentations, which was greatly appreciated by all.

All participating groups worked tirelessly to come up with a creative idea and robust financial plan to present before being grilled by the waiting ‘Dragons’! The standard of the work was outstanding; with many blue chip companies no doubt wishing their boardroom was full of such inspiration and motivation!

Once the presentations had been delivered the room was silent in anticipation of the awards ceremony and the crowing of the 2013/14 Skelmersdale Apprentices!

Rob Owens from RDPO Enterprises, who along with SHARES Lancashire have collaborated to run the initiative, said “This has been an absolutely fantastic completion that has showcased the amazing entrepreneurial talents of Skelmersdale’s Year 5 pupils.
The quality of the work, dedication and relentless pursuit of success has been brilliant to watch and be a part of. The real life nature of the competition has given added value as pupils have been able to taste what ‘real-life’ is all about."

We are confident that through this project participating pupils have learnt a lot about enterprise and have developed key life skills that will prove instrumental in achieving future success.”

Thanks goes to the National Lottery who, through their Big Lottery Fund, have provided funding towards the competition and also to West Lancashire Investment Centre, West Lancashire College, West Lancashire Borough Council and PepsiCo for their support in helping to make this project the phenomenal success it was.

If your school would like details of how to get involved with an enterprise initiative please call Rob at RDPO Enterprises on 01704 891 455 or email rob@rdpoenterprises.com

Watch this space…Skelmersdale Apprentice 2014/15 will be starting again in November 2014!